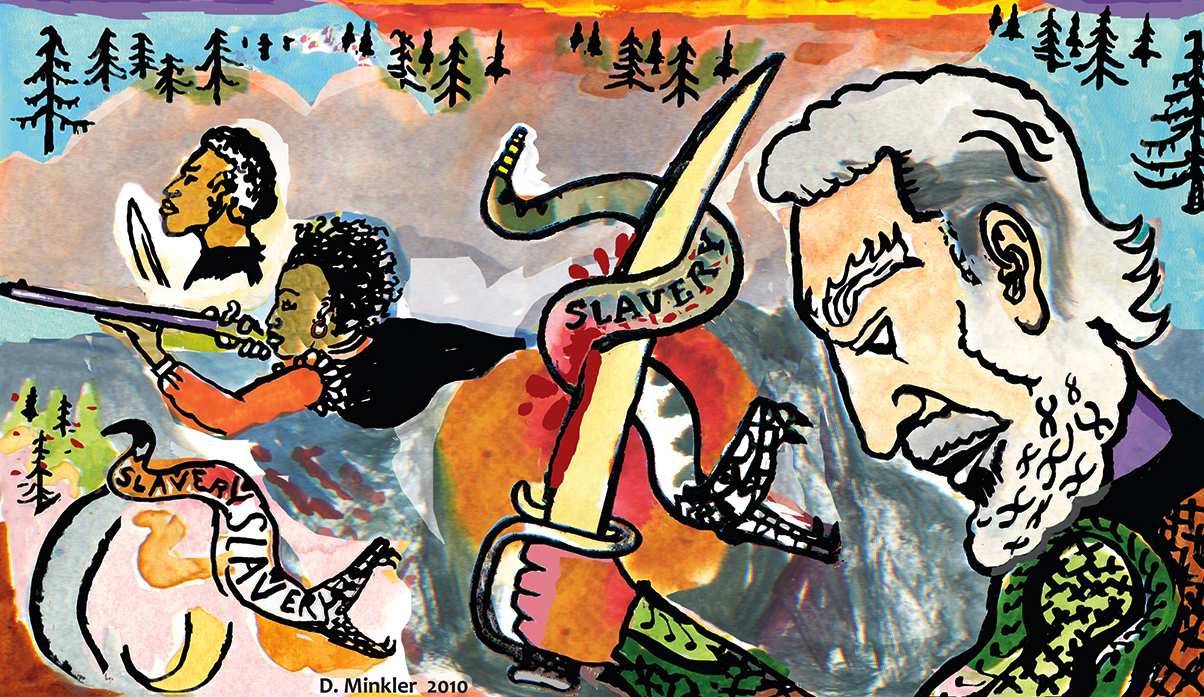 Act 1, scene 1: Ohio, Spring 1859
John Brown, a visionary who can hear and see the future, past, and present, condemns the slavery of Africans. He hears voices from the future praising him in song.

Act 1, scene 2: Same location Ohio, Spring 1859
John Brown recounts his dreaming of a slave ship, filled with captured Africans, on its Middle Passage voyage from West Africa to the U.S. He argues with a white preacher who defends the enslavement of Africans, and he welcomes his people, his allies, from the future, past, and present. [Audience and Chorus repeat Children’s “Harriet Tubman” rhyme.]

Chorus outlines John Brown’s strategy for ending slavery: a massive “underground railroad” campaign guiding thousands of Africans north to freedom in Canada, thus draining the plantations of their workforce and causing the collapse of the slavery system—all, hopefully, “without the snapping of a gun.”

Act 2, scene 1: Maryland farm across the river from Harper’s Ferry, October 15–16, 1859 John Brown asserts that God will forgive blood shed in the fight to free Africans from slavery. He describes his vision of the coming Civil War in which thousands of Africans escape slavery, many joining the Northern armies to defeat the Southern slave system and to acquire land, but after the South’s defeat, real freedom and land are denied to Africans.
[Audience and Chorus repeat Children’s “Malcolm X” rhyme.]
Musical Interlude: Expressing armory raid, gun battles, killings of some of John Brown’s compatriots and others, and arrest of John Brown and some of his compatriots.

Act 2, scene 2: Charlestown, Virginia courtroom, November 2, 1859: the last moments of John Brown’s trial [all words in scene quoted directly from actual transcript of trial]
The jury declares John Brown guilty of treason, conspiracy, and murder for trying to free enslaved Africans. John Brown tells the Court his plan was to enable a “larger scale” exodus of Africans from the South to Canada, not to foment violent rebellion or insurrection. He quotes the Bible to defend the morality of his actions.

[Audience joins singing of “His truth goes marching on!”] The End